The 1950s was a markedly classy time for men’s hairstyles. It signifies the time when the greaser hairstyles came into fruition and were rocked by the elite of the society. As the name suggests, greaser hairstyles involved the use of a lot of pomade or hair gel on elegantly cut hair.

There were quite a number of designs and variations to suit every kind of man. Today the sophisticated style lives on in some of the most stylish new and old designs. If you’re looking to get a haircut that oozes sophistication, check out these greaser haircuts.

A lot of the greaser hairstyles ended in a stylish roll-up towards the front. This example features a short, conservative roll up that matches the mannish appeal of the thick and voluminous greaser hairstyle. The look is neat all-round, aided by lots of pomades and could just as easily be worn informally as it could formally. Worn by none other than the pop god Elvis Presley, this was quite a popular look back in the 50s. It was characterized by a hair with some impressive volume to make it easier to shape into a square-lined top, with most of the length concentrated towards the front. Pomade was used in the styling of the hairstyle, which was often given a slightly wavy finish.

3 The Slicked Back Pomade Hairstyle

This was among one of the most popular greaser hairstyles back in the 50s, mainly due to its simplicity and the popularity of pomade at the time. It could work on hair of any length and involved slicking back the hair using large amounts of pomade or hair gel to create a nice, natural outline at the front and to give the hair a sleekly textured finish. 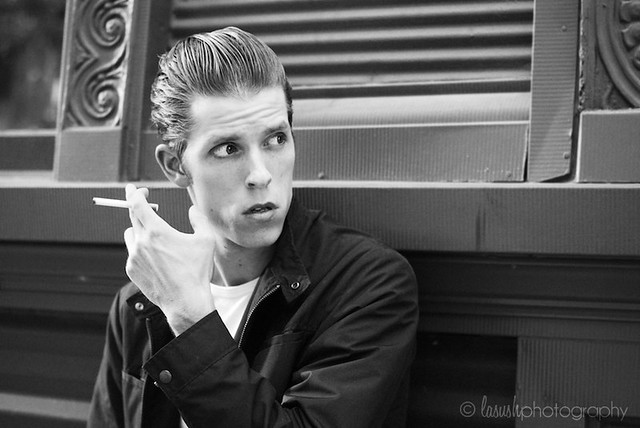 The roll-up existed in quite a number of variations. One popular way to style the roll-up was to leave it long enough towards the front to create a stylish curled up forelock. This was paired with smoothly slicked-down hair which did not follow any apparent direction. Nevertheless, the look is easy to pull off although it requires a bit of length at the front to create the forelock. One of the greaser styles that has lived on until today is the tapered top knot hairstyle. It typically involves a high top with most of the volume focused towards the front and tapered down the back and sides. The look was awfully simple and incredibly classy, which is why it has survived for so long in its original design.

The ever-classy pompadour hairstyle was a product of this fashionable era of men’s hairstyles. One of the most sought after “rebel” look involved wearing a high pompadour haircut with a tastefully wavy texture to create a fancy masculine look. Modern variations borrow from this and include tapered sides and ribbons of color through the thick locks. A simple greaser hairstyle that was reserved for the sophisticated elite involved heavily greased hair with an upturned top. The texture was generally wavy with a sleek hard part at the side to give it a crisper finish. The top section of hair was often thicker than the rest. 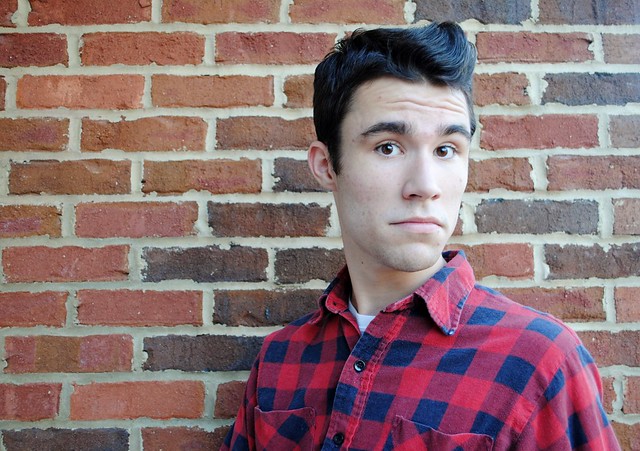 8 Side Roll with Shaved Sides

The side roll made it into modern-day fashion but is often requires a bit of tweaking to look stylish. Here we see how crisply fading the sides with a sharp clipper helps to accentuate the mop of neatly styled hair on top that ends in a cool, curly forelock at the front.

Some of the greaser hairstyles were incredibly simple although just as stylish. This look featured nothing but lots of natural texture and volume and the length was fairly even all around. The wild look was given a bit of a crisp definition using a hard part on one side. One of the reasons the greaser haircut was so popular was because it was compatible with all types of hair. Extra short hair benefited from a crisp, clean side part, which helped to give it a sharper edge, especially if it had been styled slick using pomade or hair gel. This greaser haircut boasts of incredible texture after the locks have been neatly slicked down. The gloriously styled greaser haircut uses a crisp hard part to give it a crispy cool finish, which enhances the neatness of the look dramatically. The focus of this look is without a doubt its impressive height on top. The hair has also been given a tastefully wavy texture and the locks have been tangled to give it a sort of messy finish which contrasts nicely with the neatly styled sides. 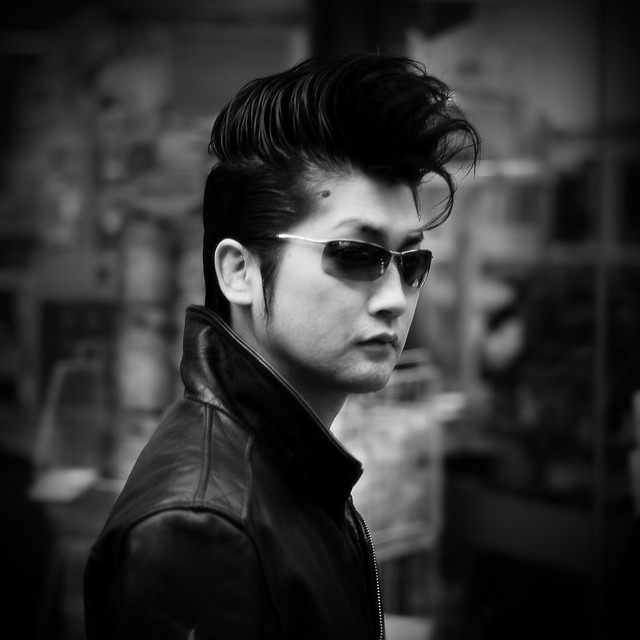 Greaser cuts heavily relied on hard side parts to add a bit of distinction and class to any look. Here, the short neatly slicked locks benefited from a diagonal side part which helped to accentuate the short hair on top and also to give it a stylish asymmetrical finish.

This look is not as heavily slicked as you would expect from a greaser haircut but it is not any less stylish. This fluffy pompadour features a richly textured high top full of volume and depth that is accentuated by nice and short sides. Although slightly traversing into the modern fashion landscape, with its tastefully highlighted tips, this look oozes the elegance of a nicely styled greaser haircut from the 50s fashion. The Shortened sides are used to shape up and frame the classy look which boasts of a hint of rebellious edginess. Other Questions You May Have About Greaser Hairstyles

Art the time when the greaser hairstyle was popular in the 1950s, there were other haircuts also trending at the time such as the pompadour, jelly roll, the ducktail (also called duck ass), and slicked back haircuts. All of these 50s hairstyles require a reasonable amount of pomade, hair gel, or hair grease to hold them in place.

Can Girls do Greaser Hairstyles?

Girls can opt for greaser hairstyles but it would depend on the hair texture and require the hair to be cut to a reasonable length to allow the gel or pomade to be able to hold the style in place.

What Products are Used to Maintain Greaser Hairstyle?

Greasers use various hair gels, pomades, hair greases, or petroleum jelly to pull the hair strands together, although, it would still require frequent combing and reshaping to keep it for longer.

What Were the Most Popular Hairstyles in the 1950's?

The 1950s was a time that saw a good number of trendy men’s haircuts such as pompadour, jelly roll, slicked back haircuts, and the duck tail (also called duck ass) which was popularized by Tony Curtis, one of the famous actors at that time. Crew cut and Ivy League were also popular in the 50’s